There we have it. I have played my part in democracy. I have cast my vote. I put the cross in the box, sealed the envelope and sent off my postal ballot. And how does it feel, to have taken part in a general election for the first time?

This isn’t just because I’m “missing out” on the practically sacred rigmarole of going to a local community centre and hiding in a slim booth as you mark your paper with a tied-down pencil stub. It’s not that at all. It’s just that as I made my mark, I thought, “Might as well go for him.” Not “Hell yeah, these guys!” This election is not inspiring at all; there simply isn’t a party I believe in, or enthusiastically want in power. And I don’t think that view is unique to me at all.

The 2010 election seemed so different. Back then, there seemed a real optimism and excitement that change for the good was within everyone’s grasp. Or at least, that optimism was in the minds of the Lib Dem voters. I was only a few months under 18, but had I voted it would have been for them. And along with all the other students, idealists, and many of my friends, I could have spent the last 5 years feeling increasingly disappointed and disillusioned too. I was the last school year that paid the £3,290 university tuition fees, and that fact makes me angry.

Lots of things in politics and the way the system is working at the moment make me angry, actually, but I’ve not wanted to delve much into this in blog posts before. Why? Well, to be honest, it’s because I just don’t want to think about it that much. And I can’t do satire well because I just get angry and end up harrumphing off into the distance, or staring miserably into the middle-distance. The more I do think, the more disenchanted I feel about the whole process – how disconnected the politicians are from my concerns, how it’s basically just a bunch of old, white public-school boys shouting at each other in such a childish manner. I bloody hate the clips of Prime Minister’s Questions on the news, when they’re all braying, like they’re 9 year olds on a school playground. And because the whole thing’s so depressing, I don’t really want to think about it. Maybe this is why so many people, especially those my age, aren’t engaged in politics. 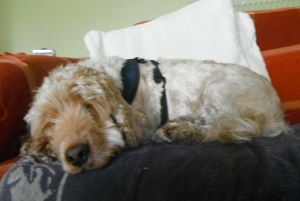 In fact, I can feel myself getting disgruntled. Here’s a cute dog called Sparky to perk things up. Isn’t he fluffy?

Not voting just isn’t an option for me, either. Especially because I’m a lass and for too long the women of this country didn’t have a voice in its governance. (Interesting fact: Emily Davison, the suffragette who tried to pin a rosette to the King’s horse at the Derby and was trampled to death, is buried in my town.) To quote Nick Clegg on The Last Leg, “It’s like going to Nando’s and asking someone else to order for you, and not liking what you get.” If you don’t vote then you haven’t had even the slightest say in the country’s leadership. And I do get that that’s kind of the problem: the first-past-the-post system means that only a few votes in marginal seats will really have an impact on the result, but the fact is, that if you don’t vote, then everyone else will and what they want will happen. Chances are, they’re voting for what you don’t want. So put up a fight.

(If you really don’t want to vote for any of the parties on offer then I suggest turning up and spoiling your ballot paper. There’s a difference between stay-at-home apathy and “I’m not cool with this” activity. And in the meantime, let’s all lobby for proportional representation.) 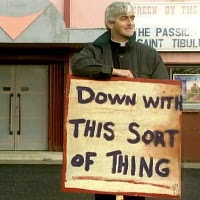 Anyway, whilst I may not be inspired that any of the parties will deliver what I want, I do know exactly what I don’t want. By nature I am a leftie. Perhaps even a socialist; I haven’t looked into my “-ists” enough to decide. Belief-wise, amongst other things, I love the NHS and don’t want it privatised, think staying in the EU is generally a good thing (although some aspects need to be looked at), am not a fan of zero-hours contracts, and would like to see tax evaders caught. I am currently reading The Establishment: And How They Get Away With It by Owen Jones, and highly recommend it to everyone. Especially you. So I certainly don’t want UKIP or the Conservatives in power. Duh. My ideology is just so different from theirs. I’d also like to leave you this link here, in which Newcastle’s UKIP people distributed leaflets calling cycle-lanes “discrimination against the elderly and infirm”, and leave you to your own conclusions. Frankly I’d be embarrassed to have that party representing my constituency.

That leaves me with a choice of Greens or Labour. Not the Lib Dems – sorry guys, but once bitten and all that – or the SNP and Plaid Cymru – they’re not standing in my area and anyway, as a person living 60 miles from the Scottish Border I think Scottish Independence is a bad thing.

In the end I’ve voted Labour. Yes, I am fully aware that this decision could come back to bite me. And no, I’m not part of the #milifandom, though I have been warming to the guy after his handling of the various personal attacks and debates during the campaign. I also like the way his internal monologue on TV seems to be “look normal, look normal” instead of Cameron’s genuine disdain that people are questioning his policies. Overall, I was thinking more on a local level. My constituency, being partly in an industrial area of the North East, has always been staunchly Labour. And the current MP has been pretty good – unlike the last guy, he’s actually visited my town more than once, and has a clue about what’s going on. The Greens I haven’t been totally convinced by. My fear has been that if I were to vote Green I might contribute to the Labour vote being split, and let the Conservatives or UKIP get in my constituency by fluke. So there we go, decision made. 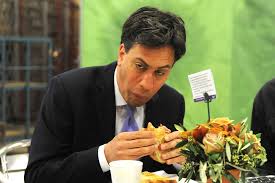 Also, I eat my sandwiches like this. I can relate. (Pic from independent.co.uk )

On a national level, I think the chances are that Labour would be more likely to listen/be forced to listen to the more left leaning parties like the SNP and the Greens. Here’s hoping anyway. Ideally, I’d like the main Labour people to rediscover the socialist ideals their party was damn well founded upon and act on them to make this country a fairer, better place for the majority, not just the people who already have serious amounts of mazooma and benefit from the status quo (seriously, go and read The Establishment. It explores the system’s inequalities so well). However, I can’t help feel that the likelihood of that happening immediately is slim.

A girl can dream. And it seems that’s all I can really do with this election. I’ve made my choice, but sadly it was down to practical considerations more than what I passionately believe in.

5 thoughts on “Electoral Musings: Disenchanted but Not Disenfranchised”