York is well known for many things – Vikings, medieval history, chocolate – but there’s one cultural aspect that you might not expect: York’s thriving geeky scene. Here’s my pick of the independent pop culture shops and nerd hangouts that you need to add to your quest itinerary next time you visit. (And don’t forget York Unleashed Comic-Con every summer!)

Your first stop should be Travelling Man on Goodramgate (just up from the York Hog Roast company – there’s a recommendation for a really good pork sandwich). Travelling Man has an encyclopaedic range of comics, manga, board games and related merch. You can also try out some of the games in their upstairs area. The staff are friendly and seriously knowledgeable, and regularly host events, game nights and tournaments. I’ve definitely lost more than a few hours in this shop. 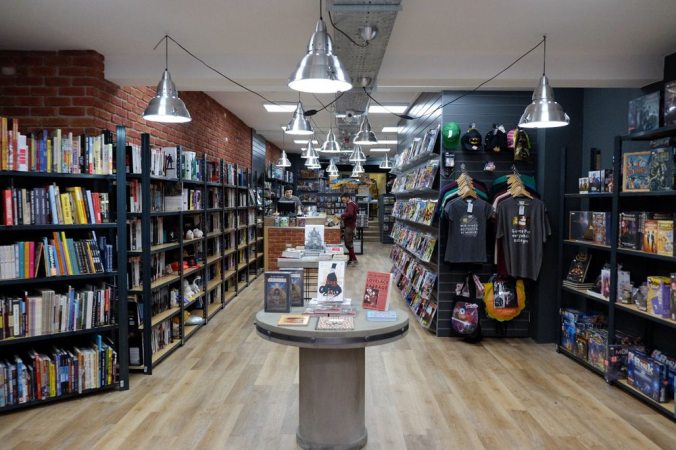 Any visitor to York has to have a nosey down the Shambles. This is one of the best preserved medieval shopping streets in Europe. For centuries it was full of butchers’ shops, but now this narrow cobbled street houses lots of quirky independent shops and cafes. One of these is The Shop That Must Not Be Named, the original specialist Harry Potter themed shop in York. Why here? Look around – the Shambles was inspiration for the set design of Diagon Alley, the famous wizarding shopping street. Selling officially licensed Potter wares, The Shop That Must Not Be Named has a great selection of film prop replicas, jewellery, homeware…basically anything Harry Potter related. There’s nothing the staff don’t know about the wizarding world.

Be aware, this shop is rather popular and there are often queues during school holidays and weekends. I’d suggest arriving early in the day or late afternoon. 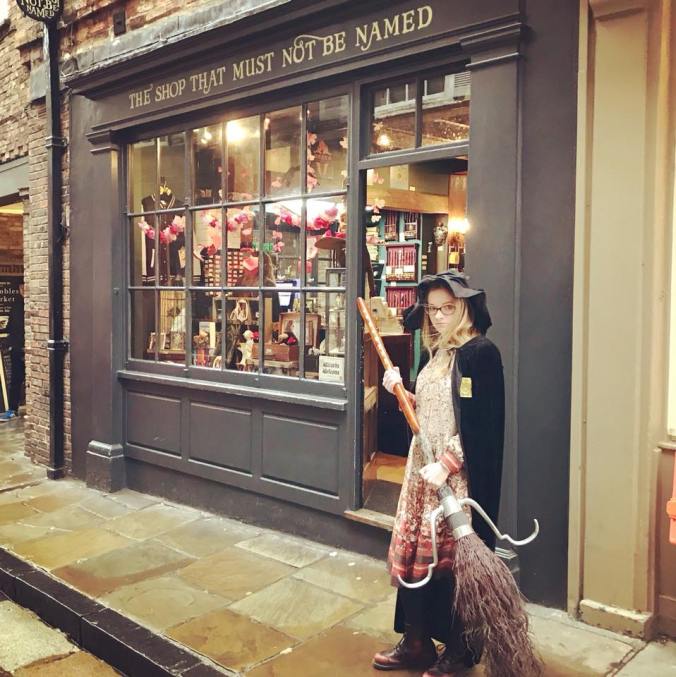 From The Shop That Must Not Be Named facebook.

Continue down the street to Fossgate and you’ll find The Shop That Must Not Be Named’s sister shop, …give the dog a bone. It’s described as “two floors of things you don’t need but really, really want” and that’s 100% accurate. Downstairs is an Aladdin’s cave of cute and quirky gifts and homeware (who doesn’t need an origami-style dinosaur lamp, or a cuddly ravioli-shaped plush?) and upstairs is full of pop culture merch that will satisfy everyone from Trekkies to Nintendo fanboys. I can always find excellent presents, and abusive birthday cards, for my pals here.

For video game fanatics, a visit to Sore Thumb Retro Games on Gillygate is a must. This is a treasure trove of games and consoles from yesteryear. Sega, Nintendo, Commodore, Atari, PlayStation, it’s all here. Their shelves are absolutely rammed – if you’re looking for an elusive game, you’re more than likely to find it here. You’ll spot the shop easily as there’s a life-size Stormtrooper stood guard in the window (sadly, he’s not for sale).

Finally, finish your tour of geeky York by whiling away a few hours at Random Encounter. Just next door to Sore Thumbs, this board game and computer game café opened in 2017 and has rapidly become one of my favourite places in York. I mean, Bettys is lovely, but you can’t whoop your mate’s ass at Mario Kart while eating cake there, can you? For a small fee, you have access to Random Encounter’s huge collection of board games and consoles, ranging from the Nintendo Switch to more old-school Atari 2600. There’s loads to choose from, plus the food and drink on offer is lush. Try the brownies, there’s nothing else quite as squishy on this earth. Random Encounter is all about being inclusive and friendly, and they run various events throughout the month, including beginners’ D&D nights, game nights and quizzes.

That’s my pick of independent geeky places in York. What’s your favourite? Anywhere else good I should know about? Drop me a comment below or tweet me @scranshums.