NB this article contains spoilers as to the true nature of Santa Claus.

It was a Christmas Eve when I was about 10 or 11; I was sat sorting tree decorations with my Mam in the living room. Gradually the Wilson household had developed the tradition of putting up the tree and decorations in one festive bang just before Christmas, and this year was no exception. I can’t remember how we got on to the topic – maybe we were about to leave out a mince pie and carrot for the visitors – but while talking, Mam saw some maturity in my face that allowed her to confirm “yes, Santa is not real.”

My first question was “who eats the mince pie and whisky we leave out for him?” and this was answered by a timely maternal stomach gurgle. On the whole though, I wasn’t that fussed. I’d still get presents, and every other tradition would continue as normal, so the magic of Christmas hadn’t really been diminished by this revelation. And besides, I’d suspected this for a while, especially when a book I’d bought – The Worst-Case Scenario Survival Guide: Christmas – was mysteriously missing its page on “how to explain Santa Claus doesn’t exist”. Soon I twigged that my parents had removed the page, lest I be upset, but I really was miffed: they’d disfigured my book!

One thing did occur to me though; Santa had always left little Christmas cards for me, so Mam must have written them. But Santa’s handwriting looked an awful lot like that of the fairies who lived in my garden. I’d noticed this before, but now, as tears started to dampen the tinsel in my lap, I realised the terrible truth.

In folklore all across the country, fairies are known to live in woods and hills, generally causing mischief. There’s a story from my home town called “The Magic Ointment” about a doctor who is given ointment by faries to stop him seeing them, but he tricks them and they turn him blind. Vindictive little buggers, eh? In my mind, though, this co-existed peacefully with the idea sold to me in many pink, flowery pop-up books of sweet girly fairies flying around making cakes and visiting animals. In fact, I’d mapped out my entire home town for fairies: the Ha’ Hill in the park is where “The Magic Ointment” says the fairy king lived, so obviously that was the capital; various funny-looking trees were home to fairy families; and a large grassy area, bordered by trees, near my house was a school complex for young intelligent fairies. They of course had their own secret access to the chip shop. There were even a few embassies of goblins or other creatures around for when my imagination created an inter-little-people cold war. 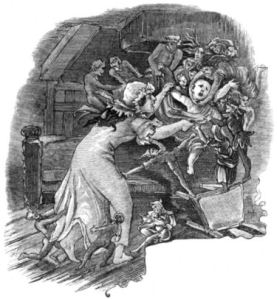 Little People disputes are generally over stolen children, and who provides musical accompaniment during the stealing.

My fairly large garden was a fairy settlement all of its own. The shrub that coiled around the tree had a large gap inside it, making it the town hall. Fairies who particularly liked rhubarb lived at the top end where my Dad’s veg patch was sited. One summer I built a little fairy grotto in the roots of another tree using pretty coloured pebbles. Most of the fairies lived near the series of ponds, so that’s where I’d leave my little letters, in a mossy flowerbed.

I recently found a few replies I received in a drawer at home. To begin with I seem to have acted as anthropologist in asking the usual questions of “What do you eat?”, “What do you make your clothes from?” and “Have you seen Toy Story 2?” I did find it interesting as a child that the fairies professed to eat lemon drops and strawberry lozenges, yet they also passed on messages from the Tooth Fairy, encouraging me to brush my teeth more. Either double standards were at work here, or fairy tooth enamel was much stronger than human.

The fairies were obviously abreast of the goings-on in my house, as they once politely signed off hoping that “the builders have not left a big mess in your house”. I still found it necessary to find out if they were up to date with human news, evidently asking once if they knew about the war in Afghanistan (and if they had any similar bother themselves)! My small correspondents dutifully replied “It is sad that there is a war. We have a lot of trouble with goblins who disrupt the peace, but they do not have such powerful weapons.” No WMDs then – Weapons of Magic Disruption?

“These toadstools are capable of being launched in 45 minutes!”

Whilst I felt it important to check out the fairies’ knowledge of current affairs, I never doubted their skill as craftspeople. One birthday party, a storyteller came to entertain my amigos and she gave me a little mirror that, according to her story, was made by fairies. It was a beautiful gift, a sparkling gold disk inlaid with diamonds of mirror and bands of darker gold metal. I instantly declared to all and sundry that this was definitely gold hand-spun by fairies “because I know fairy gold when I see it”.

I found that treasured mirror in the same drawer as the fairies’ letters. It’s still as sparkling as the day I was given it, and I’m glad to have found it again: not merely because I need a new pocket mirror, but because when I take it out of my bag to see if there’s anything stuck between my teeth, I’m reminded of fairy stories. Not the original tale the storyteller told – I’m afraid I’ve forgotten that – but all the ones I made up to make the world seem a bit more magical.

I’m pleased I found the mirror, but I hope never to come across my original notes to the fairies: I bet my young handwriting would be appalling to read.