8am – This is the earliest I’ve been up in a long time, even though my alarm goes off at 8 every day. That’s what shift work and winter darkness do to you. This morning, however, I have an incentive: it’s time for the traditional Wetherspoons breakfast with school friends. We started this off a few years ago when most of us went off to university and the only time we could guarantee all to be together in the winter break was Christmas Eve. I’m a little late for 9am kick-off because I’ve been wrapping their presents. This year I decided to make rum truffles and wrap them in tin foil, which was a little more time-consuming than I expected. I spend my walk to the pub trying to think of a witty excuse, but just settle on “I was wrapping your pressies, so ner.”

11am – A couple of us pop in on a friend who’s working all day, and I do my traditional family card deliveries around town. One year our friends will get their cards before Christmas Eve, but this is not that year!

4pm – After a stiff-neck-inducing nap, I head off to Morpeth’s finest drinking establishment for the late afternoon/early eve shift. It’s fairly busy. The highlight is the gradual dishing out of the Secret Santa presents – I receive a small book of “Over 100 S and M Sex Tips”. I momentarily contemplate donating my gift to the next Antiquarian Society raffle, but I don’t want to be responsible for any heart attacks among the membership. Full marks go to my colleague who has bought a Cliff Richard calendar and stuck another member of staff’s Facebook profile pictures over Sir Cliff’s face.

I wonder if Marks and Spencer have ever thought about releasing their own book of “M and S Sex Tips”?

10pm – I return home to wrapping and putting cards around the living room. One of our big festive traditions is watching the Father Ted Christmas special, “A Christmassy Ted”. In our house, it is simply not Christmas until several priests have become lost in Ireland’s biggest Lingerie section, the housekeeper has been usurped by a tea machine, and we’ve joined Father Jack in a chorus of profanity. Priests launching a daring escape from an underwear section. I mean, what a concept.

I put up the quote of “It’s Ireland’s biggest lingerie section…I understand” on Facebook to see which of my other friends are cool enough to get my drift. 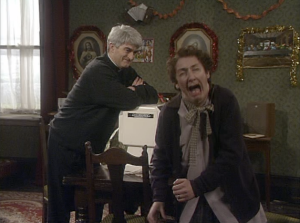 The universal face of anyone who’s been given a present they detest.

2am – I finally get to bed. I’ve spent more time than expected doing the family Christmas cards: they take a while to do anyway, because we bung in loads of pictures and caption them with obscure in-jokes. This is another family tradition that started when my uncle was at university. He’d send back letters every week with all sorts of doodles and pictures, which morphed into our doctoring of cards on every excusable occasion. You could probably trace the cultural changes and local and national politics of the last 40 years through our cards.

8.30am – Unusually, Dad has been working nightshift this year, so he just gets home at half 8. We get up and do stockings and presents before he goes off to bed. Concerning presents, I think the winner for me is a pair of espresso cups decorated as original Penguin publishing books, although my penguin fluffy slippers are a hit, too. 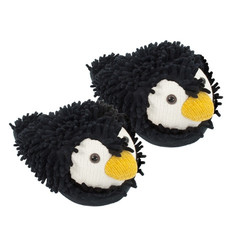 You may have gathered by now that I rather like penguins. Family and friends tend to capitalise on this for present ideas.

A pair of salt and pepper shakers in the shape of penguins (again), coupled with my recent birthday gift of a lasagne dish, strongly suggests that Dad is hinting for me to shift and get my own house. Subtle.

Seeing as I also now have a bottle of Cointreau, I’ll share with you one of my favourite cocktails, learnt at Morpeth’s finest:

My Dad has bought the family a new bottle of Brandy – or rather, “Brand X”. I’m not sure where he got it from, but I’ve got reservations about a bottle that tells us it’s “a delicious blend of fermented and distilled alcohol” but doesn’t tell us what those liquors are. I hope the ingredients are legal and it’s not a mix of paint stripper and moonshine sold by an ex-evil villain who hasn’t got the hang of creating marketable names yet.

10am – I’m shocked to realise I haven’t any new books from my parents. This is most unusual.

12.15pm – Another family tradition: the opening of the parcel from friends in Canada and deciding who gets what. We usually get a wide selection of funny stuff from them. Last year’s sound effect machine was particularly successful. I pick a brewery t-shirt with a bloke who looks like Captain Haddock from Tintin on the front. My Uncle and Mam pick between two wooden coasters, one with a duck on, and the other with a beaver. This leads to the line, “I dunno, but the duck is more aesthetically pleasing.” The Uncle also picks a bobble-headed Kermit the Frog to replace the solar-powered waving Queen the same Canadians sent a few years ago. She had to be retired recently, when her hand fell off from excessive waving.

3pm – I take another impromptu nap against a bookshelf, which makes me miss the Queen’s speech. Apparently she said something about Game of Thrones. I hope she’s not giving Charles any ideas. Dad surfaces and sets about making the Christmas dinner with Mam. I am unfortunately struck down with a headache and so cannot help, but must rest and watch Puss in Boots instead. Darn.

5.30pm – Jaffa Cakes and G and Ts all round as my cousin pops in, and then we settle down for the main course of Christmas dinner. We got around faffing with stuffing a turkey this year by buying a four-bird roast from a well-known freezer-based supermarket. It’s good, but I can’t tell which meat is which.

6.15pm – Food, and everything else in the house, pauses for the Christmas special of Doctor Who.

6.40pm – I start bemoaning the now-traditional moment in an episode when Clara the assistant is told what important choice to make by a male character because she is incapable of doing so herself.

7.15pm – Episode finishes and I have another nap.

8.20pm – After I take a short break to ring Morpeth’s curfew bell (didn’t work, everyone’s still awake) at the Clock Tower, we all reconvene for meal part 2: the Christmas pudding. Dad liberally empties the Brand X bottle over it, I douse the lights and we wait, with bated breath, for the display of blue flames.

The first match refuses to take; the second fizzles out when in contact with the liquid in the bottom of the pud dish. For alcohol, this Brand X sure ain’t flammable.

Six matches in, and we give up. We have to drink the excess booze instead of letting it prettily burn.

9.30pm – I think I’ve had another nap; I don’t remember the last half hour. Either that or the Brand X is stronger than I thought. Time to UNLEASH THE MUPPET CHRISTMAS CAROL!!!!

00.00 – I finish listening to the Radio 4 dramatisation of Terry Pratchett and Neil Gaiman’s Good Omens (I really recommend, it’s so funny) and head to bed.

So there you go. If I’ve learnt anything from this Christmas, it’s that I should persuade Dad not to have a nightshift Christmas Eve or buy knock-off brandy, and I shouldn’t nap as much. Happy holidays all.

3 thoughts on “My Christmas Diary”