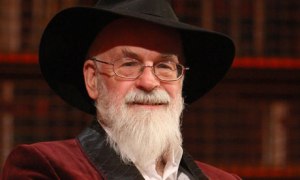 (Pic from The Guardian.)

This week’s article was going to be about cocktails. I’d found a strange, yet perfect, quote to start it off, from Sir Terry Pratchett: “Never trust any complicated cocktail that remains perfectly clear until the last ingredient goes in, and then immediately clouds.” Meaning to google which book of his it came from, I wrote it down and left it. When I next put on the computer, I learnt he was gone.

Terry Pratchett’s way with words was masterful. So was his way with ideas: he’d guide you through a plot carefully and subtly until you faced a blinding moment of understanding of the reality of a situation. He possessed the skill to condense these universal truths and Big Thoughts into sentences of pure clarity that make you suddenly sit up and think, “Yeah. Of course. Why hasn’t anyone put it like that before?” No one else quite summed up the human condition, so succinctly and often, through the character of Death:

THAT’S MORTALS FOR YOU, Death continued. THEY’VE ONLY GOT A FEW YEARS IN THIS WORLD AND THEY SPEND THEM ALL IN MAKING THINGS COMPLICATED FOR THEMSELVES. – Mort

His dry humour masks his underlying anger against injustice. He frequently, and hilariously, disassembles the politics, religion and more questionable mores of the human world through his own created landscapes, showing the absurdity of many behaviours and lampooning The Man. Frequently, his main characters are people who’d normally be overlooked by society, but who use their heads to get out of trouble, astounding themselves with what they – the “little people” – can achieve. His satire and humour transcend the normal boundaries of literary genres.

I was a bit late to the Pratchett Party. To tell the truth, when I was little I was put off by the twisting figures on the paperback covers, and even though I read and loved The Amazing Maurice and his Educated Rodents (a tap-dancing rat!) I wasn’t sure if fantasy was my “thing” during my teens. My Dad, however, has been a fan for years – he loves Commander Vimes – often reading aloud passages he thinks particularly pertinent or funny, so I started to change my mind. But school and university work got in the way of me sitting down and enjoying a good read.

At the start of last year I was in a very, very black place. And Terry Pratchett (along with Neil Gaiman) helped me through it. I was staying with a friend who’d been extolling the amazingness of Good Omens for a while, and one day she stuffed her copy into my hands saying something like, “Read that, I know you’ll love it.” I wasn’t sure how a book about the apocalypse would cheer me up, but the second the demon and angel started bickering, I was hooked. And laughing. And thinking. Because while a lot of books and films have the end of the world as a catalyst for action, not many stop and think about why the characters don’t want the end of days. (Any more and I’ll ruin the plot for you, so I’ll shut up now. Go and read it.) Those thoughts really stuck with me, at a time when I needed them.

A few months later, it’s September and I’m in a small flat in Florence. I’d been getting stuck in to Discworld, but only in earnest because my final year of university kept getting in the way. But now I’m free, and also on my own in a strange city where I’ve just arrived to learn the language for a month.

On the second evening I’m at a pretty low ebb, homesick and casting around my room for some distraction. Having a nose through a bookshelf, I find a copy of The Truth. I settle down to read, and it’s just like having an old friend next to me, telling me a daft story, making me laugh, and keeping me company in the unfamiliar city.

My resolution this year was “to read all of the Terry Pratchett.” I’m going to make sure I keep it, but I don’t want to devour everything at once. I want to savour his perceptive thinking; his creative footnotes; his well-developed characters and sharp turns of phrase. His imagination was second to none, as were his warmth and love for humanity.

He had an excellent choice in hats, too.

And T-shirts. (Pic from fashionablygeek.com)

Since the announcement of his “embuggerance” in 2007, we expected this day would come and I greatly admired his bravery in facing such a cruel illness. How could a brain that creates gods trapped in tortoises’ bodies and imp-drawing speed cameras turn on itself in such a way? But he was articulate about his illness and the right to maintain dignity in death, and his final tweets show him eloquent to the very end.

Never have I seen such an outpouring of heartfelt sadness by my friends on facebook, and this indicates exactly how loved, and missed, Terry Pratchett is. But thanks to the many, many works he left behind, he will never truly be gone. His dry voice will always be there, whispering amongst the bookshelves (hopefully chattering away with the other books, as in the stacks of the Unseen University – I like to imagine him and Douglas Adams swapping ideas) and helping to make the reader’s world a better place in so many ways.

“No one is actually dead until the ripples they cause in the world die away.” – The Reaper Man

2 thoughts on “On Terry Pratchett”