This week saw the Feast Day of St Cuthbert on Friday 20th March. No doubt on this date you were all still getting over your St Patrick’s Day super-hangovers, but I’m here to educate you about Cuthbert, one of the famous Northumbrian saints from the early middle ages. Amongst his fans are ill people, proud Northumbrian ex-scholars like me, ducks and otters. (Stay tuned for the otters.)

Cuthbert himself was born around 635 in what is now southern Scotland, then part of the Kingdom of Northumbria (I never miss an opportunity to mention the extent of the old kingdom. One day we shall reclaim…). He became a monk at the monastery of Melrose in 651, after seeing a vision of the dying Bishop Aidan of Lindisfarne, who is credited with having brought Christianity back to Northumbria. Cuthbert rose through the ranks, becoming abbot (and maybe bishop) of Lindisfarne in the 670s, and becoming famous for his preaching skills and travelling to remote communities to spread the word of God. Later, he retired to Farne, another island near Lindisfarne where he lived as a hermit. He moved back to become Bishop of Lindisfarne in 685, before returning to his hermitage and dying two years later. Unlike other religious men, he seemed to be skilled in both living as a hermit (praying and suffering loneliness and hardship to purify his soul for God) and being a good pastoral leader, looking after the souls of the people in his diocese and gaining a reputation for healing miracles. It’s a tricky balancing act, having to look after your flock but desiring isolation – he seemed to manage both famously.

Quite a bit is known about Cuthbert – or Cuddy, as he’s known up north – thanks to the Venerable Bede’s History of the English Church and People, written fifty years after Cuthbert’s death, and three Lives written even sooner after his death. If you don’t know, saints’ lives are basically biographies of the person’s life and works, bigging up any particular miracles or good qualities, but these have to be taken with a pinch of salt because they were written perhaps decades or centuries after a person’s death, by writers trying to promote their cult. So of course their saint was the best one ever. Cuthbert’s three Lives are early, so the stories in them are hopefully more authentic, but they were written when the cult was being vigorously promoted in response to various tensions in the Northumbrian Church. (For more information, see my third year dissertation.)

Anyway, the interesting stuff happens after he died. Cuthbert was buried by the altar in Lindisfarne church until the Vikings rocked up in 793 and sacked the island. Stupid barbarians. I’m not a fan. The community struggled on for a bit until they decided the Viking threat was too much so they shifted Cuthbert’s coffin and other saved treasures, and started wandering across the North. They settled at Chester-le-Street for a hundred years before founding a permanent church and community in Durham in 995. Apparently Cuthbert himself picked the spot, because the wheel fell off the cart carrying his coffin just as it passed the site of the later cathedral – this was taken as a sign of where the saint felt at home. 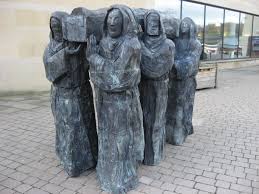 I know it’s historically inaccurate, but I like to imagine Vikings chasing the monks, while the Benny Hill music is playing.

Cuthbert’s coffin was opened twice in this early period; once when the coffin was reburied in Lindisfarne, and in 1104 when he was buried in the newly built Durham Cathedral. Both times it was reported that his body had not decomposed at all. Quite a feat for a dead person, and taken as a sign of God’s approval of his purity and holiness (though, an uncorrupted body is a common element in lots of later saints’ lives). He also started to gather more of a miracle-worker reputation, thanks to people who visited his coffin when ill becoming miraculously better. In 1104, the Durham monks had a rummage in the coffin and moved the relics to a separate shrine in the cathedral: amongst these was a tiny copy of the Gospel of John now known as the St Cuthbert Gospel (British Library Additional Manuscript 89000). It’s only three and a half by five inches, and is the oldest western book to keep its original binding. I saw it on display at the Lindisfarne Gospels exhibition in Durham last year, and it’s epic. If you like early medieval manuscripts. Like I do. 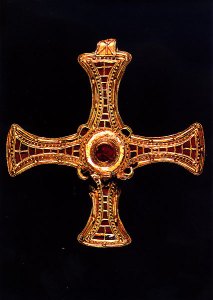 They dug out some bling too, but whatever. (Pic from Durham Cathedral postcards.)

Like those of all other saints, Cuthbert’s shrine was destroyed during Henry VIII’s Dissolution of the Monasteries, but unusually, the relics survived, still be found at Durham. But that may not have been the end of the bodyshifting. Rumour has it that Cuddy’s body was secretly removed from the cathedral and replaced by a freshly dead local monk before Henry VIII’s heavies turned up, and he was secretly buried in the grounds of Crayke Abbey in North Yorkshire. Different stories say that only 12, or 3, monks knew the body’s true whereabouts, and pass this knowledge on to one other brother when they die. All very “Da Vinci Code”, but Crayke Abbey was also dissolved in the Dissolution – there have been no continuous line of monks in England to keep such information alive. Nice story, but that’s all (bagsy film rights).

Nowadays, St Cuthbert is the patron saint of the Roman Catholic Diocese of Hexham and Newcastle, and has lent his name to many churches, a school and a Durham University College. His cross also features as a symbol of the North-East, appearing on the flag of County Durham and the coats of arms for Newcastle and Durham Universities. He’s having a resurgence in popularity; for the last few years on his saint’s day the Northumbrian Association organise a walk tracing part of the final route of his coffin, from Chester-le-Street to Durham Cathedral.

In terms of traditions associated with him, I don’t know of many. If you do, please add in the comments below! All over Northumberland, the Eider duck is known as the Cuddy Duck: in the usual way of a hermit saint, Cuthbert was thought to have a special affinity with wildlife, and during his time on Farne he brought in special laws to protect the ducks and other birds nesting on the island from hungry monks. The ducks still breed in their thousands off the islands.

Cuthbert is associated with the carboniferous crinoids found on the beach at Lindisfarne. These little fossils look like beads, and legend says that Cuthbert would string them together to use as a rosary, hence the being known as “Cuthbert’s beads” (elsewhere in the country they are called “fairy money”). It’s also considered bad luck to take them off the island if you pick them up. However, like most of my Year Four class, I brought home a couple after a field trip…touch wood, I’m preferring to think of them acting as a promise that I’ll return to the island and put back the beads.

A final, fluffy, story to leave you with. As I said, hermits living the ascetic life were thought to have a special affinity with animals. In one of his Lives is a story where Cuthbert is followed by another monk who wants to see why he’s sneaking out of the monastery at night. He finds Cuthbert standing in freezing cold sea water up to his chest, praying and singing psalms for several hours. When he could not endure the cold any longer, he returned to the beach and kneeled to continue praying; two friendly otters crawled up to him and licked him with their tongues until he was dry and warm again. 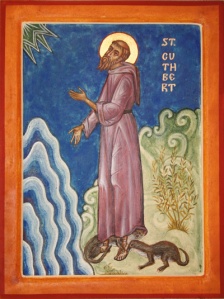 That otter looks more like an anteater. (Pic from thinktheology.co.uk)

Not that I’m suggesting you celebrate St Cuthbert’s Day by asking an otter to lick you. That only works if you’re a saint, otherwise the RSPCA gets involved.