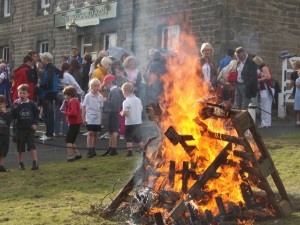 Happy 4th July to our American cousins (I’m a bit late, but the sentiment stands). Admittedly, as a Brit, I mainly know Independence Day as the day Will Smith and Jeff Goldblum saved the earth using Apple technology and Morse code, but that’s not the only celebration going on the 4th.

In a small village called Whalton, in Northumberland, the 4th July is still celebrated as the old summer solstice by the burning of a bale, baal or bonfire. 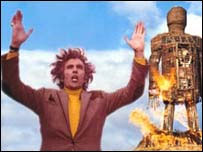 No, you’re not listening. (Pic BBC)

The custom goes way, way back. Traditionally bonfires mark the four most important parts of the year’s cycle – the autumn equinox, winter solstice, spring equinox and summer solstice – the idea being that the flames would encourage the sun to continue its path and return each year. These were particularly important in the depths of winter to bring light into the night and perhaps remind the sun to hurry up and get back to shining and helping the crops grow.

But modern Midsummer Day is the 21st June. Why the date disparity here? Well, as I’ve mentioned before, back in 1582, Pope Gregory altered the traditional calendar to account for it getting out of sync with the cycles of the moon and sun by three days every four years. This mainly showed when trying to work out when Easter fell each year, a process that enough dudes had argued about before. Gregory decreased the number of leap years in a 400 year cycle (that’s why most century years are not leaps) and brought in a ten day shift to make up for time lost since the early middle ages. Christendom gradually implemented this, although the Brits, being reluctant to change, didn’t until 1752, and there were riots demanding, “Give us back our days!” (mind, Greece only caught up in 1923). Some people – such as those in Whalton – continued celebrating their festivals on the old dates, just in case God disliked this new calendar.

Anyway, this tradition of lighting a bonfire in Whalton on Old Midsummer Eve has gone on possibly since the Middle Ages (there’s no recorded unbroken line, but it’s likely). ‘Bale’ comes from the Anglo-Saxon word ‘bael’, meaning a big fire, like a beacon on a hilltop, warning of approaching raiders. Not even the war stopped the tradition: a massive flaming pyre in the countryside would be bad, signalling to enemy bombers, and so one villager lit a match and then blew it out in a symbolic gesture. Only once in living memory has the bale not been lit, when a few years ago, high winds were deemed unsafe by health and safety. Health and safety was less concerned in the past, when a villager living right next to the fire had a yearly panic that the bale would set fire to the ivy trailing across her house.

Before the fire is lit on the green, the children from nearby Whalton First School perform a traditional circle dance around the wood pile, and bring their families to join in. In the past, people also leapt over the lit fire, and it was considered lucky for young couples to jump over the embers, but this practice has not gone on for a while. Scorched feet aren’t lucky in this day and age. Since 1968, at the suggestion of my Grandfather, Morris dancers have been invited to perform in the middle of the road outside the pub; musicians play, and then if it’s on a weekend there’s sometimes a ceilidh in the village hall.

I’ve gone to this since as long as I can remember and was pleased to be “promoted” to being a musician to play for the kids dancing in recent years. It’s a charming tradition that shows signs of survival, thanks to the interest of the school (and the fact that building a bonfire is a fairly low-maintenance tradition). Admittedly the size of the bonfire has decreased, even within my memory; while my Mam once remembers tyres and an old piano jutting out of the flames, now you’re more likely to get a small pile of fast-burning pallets. As this year’s one proved, though, even a small pile can get a good blaze going and get the kids scattering as the tongues of heat become a little too hot even from a distance. 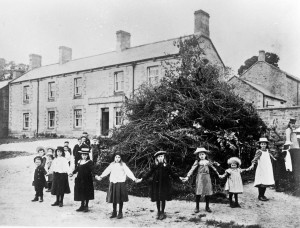 You could put a lot of sinister captions onto this photo. (Pic from the Beamish Archive)

One thought on “On the Whalton Bale (4th July)”