The American Independence Day. Despite being thoroughly British (and having my own Northumbrian occasion to mark), I’ve spent the last 2 years celebrating the 4th July with American friends. Last year, I was in the States and spent the day chilling with friends, watching The Mummy and The Mummy Returns (their family tradition) and set off fireworks by Lake Niagara. The previous year we had a party in my uni common room with lots of American food and English beer. I dressed as (sexy) George III and my Ohio friend threw a teabag in an already-heavily-polluted lake. We had a great time.

Anyway, to celebrate this year, I’m nowhere near a lake and I’m going to watch one of my favourite films of all time. I could go on about how much I bloody love Independence Day all day. It is a classic of modern cinema and anyone who disagrees can bite me. (I even used the President’s epic speech in my A level English Writing to Persuade coursework analysis.) Sure, it’s cheesy, overblown and got its crap bits but that’s partly what makes it so epic. It’s not pretending to be something other than entertainment. It’s a truly great summer blockbuster that ticks all the right boxes and it’s got suspense, Will Smith, and Jeff Goldblum (and they never made a sequel to it. That never happened). And all these elements make up for a great drinking game…*

Take a drink every time:

I can, and will, bang on about the frankly iconic practical effects till the cows come home. From giphy. 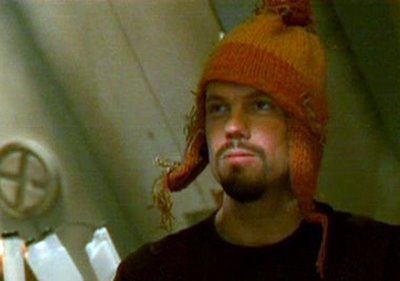 Man walks down the street in that hat, people know he’s not afraid of anything. Image from whatthecraft.com

From IFC on giphy.

Bonus round for people with a 13-year-old’s sense of humour: watch the alien autopsy scene with no visual, just the audio. It’s just…SO wrong.

So let’s raise a glass to celebrate America’s real Independence Day and the destruction of a fictional alien invasion fleet – drink responsibly now, but don’t go quietly into that night!

From (you guessed it) Giphy.