It is a truth universally acknowledged that genitalia are funny (and that starting an article in such a way is a massive cliché, I’m sorry). Especially dicks. All through history you can find graffiti of penises, crude jokes and the like. I really don’t know why – perhaps it’s to be edgy, explore taboo ideas or just because, well, look at it, it’s a funny looking organ (sorry fellas). The middle ages were no exception. I’ve recently written an article for culturised.co.uk, a new arts and culture website, in which I talked about the medieval art motif of the penis tree. During research for this, I came across three BLOODY HILARIOUS stories about “wandering genitalia”: basically, penises and vulvas being separated from their owner and having their own little adventures.

I’m a sharing person, and I love a chance to snigger, so I’m going to introduce these stories to you. They’re all anonymous and found in fifteenth century German language compilation manuscripts. Other than the fact that they fit into the corpus of ‘lewd’ texts and objects from the late medieval period, we don’t know much about them. Anyway, I’m not being incredibly scholarly here: I’ve retold them in my own way, and played fast and loose with some minor details. Bits in italics, however, are direct quotes in translation. (I am indebted to Ann Marie Rasmussen’s 2009 article “Wandering Genitalia: Sexuality and the Body in German Culture between the Late Middle Ages and Early Modernity”. This has excellent translation and analysis of the broader implications, themes and story ideas.)

(As the name suggests, this article touches upon themes of castration and personified genitalia being manhandled. I’m also sniggering in the manner of a (highly-educated) 12 year old at cis-male and cis-female genitalia from the texts’ and my own heteronormative perspectives, which I do appreciate is upsetting for some people. No offence is intended.)

Ready? Brace yourselves. We start with… 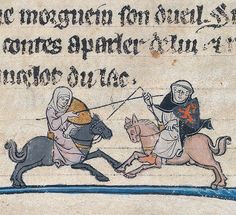 So there’s this knight, who’s incredibly popular with the ladies. He gets himself quite a reputation, but, the poor thing, he’d much rather women wanted him for his personality. One day, he’s leaving the bedchamber of a woman who’s pursued him for a while when she asks for a second round. He says no, that’s not his policy. She gets annoyed (clearly some medieval stalking here) and threatens to tell everyone he’s impotent, and besides, he’d be much more popular with quality lasses – not those full of lust – if he castrated himself.

Later on, this knight gets into an argument with his penis. I’m not entirely sure how, perhaps his underwear was felt to be vindictively tight, and the angry penis itself suggests castration, shouting:

“Don’t you get it? It’s on my account that you are warmly received, and you have acquired more honour and dignity because of me than because of the most precious treasure you ever possessed, and yet you have never let me benefit in the least. Oh no, you have forced me into a corner, into the nastiest nook you possess, one that even the basest servant would refuse. I want you to know that I’ve had it. If you weren’t such a base and lowborn coward, you would just cut me off right now so that women and men alike can see which of us fares better!”

The knight is convinced, and cuts his cock off to spite his…cock. Alas, he does not fare well in this separation: women who he turns to, beat and mock him, driving him to live as a hermit in a cave for the rest of his life.

The second part of the story follows the freed penis. He has a good wander, but realises he’s made a mistake in demanding separation. He finds his way to a nunnery and hides under the stairs for a year, just sitting and being miserable. When he reaches the depths of despair, he attempts to commit penis-cide by standing in the cloister, where he hopes the nuns will be scandalised and destroy him, thus ending his unhappy existence. But no. The nuns each take him to their rooms and uh, ‘punish’ him.

Soon the nuns start squabbling over who gets to “chastise” the penis. One novice points out that the monastic rule says they should all share (perhaps a bit unhygienic in the days before wet-wipes), but instead the abbess declares a tournament, so the matter can be settled once and for all. The penis is carried out in state, and watches the nuns fight it out from the comfort of a silk pillow. Of course, with so much at stake, the tournament descends into a full-scale brawl. Unfortunately, during this the penis vanishes, either stolen, destroyed or run off.

The nuns all agree never to speak of this incident again. 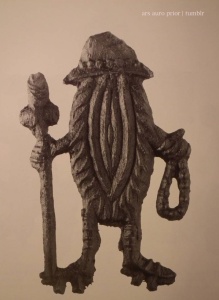 The Rose Thorn (Told by a male narrator, who is a secret observer to the action.)

I’m not creeping, right? I’m no perv. But I was out having my daily walk when I could see this lass bathing in this grotto she’s built for herself. I mean, yeah, she bathes there every day but I can’t avoid her, this is the route I always walk. It’s not my fault she’s naked. Anyway, this day I couldn’t help but hear an argument, so I popped up to the hedge to see what was happening. Like if she needed bailing out from a mean lover or something.

It seemed that one of the magic roots you get in these parts had somehow given her – you know – cave of mystery the power to talk, and it was having a go at her:

“Men only like you because of me. We’re virgins, and without me you lose all your worth and allure, so show me some damn respect and get me a netflix account and some seriously silky, comfy knickers, ok?”

And then, as I’m watching, they separate. The lady grabs a towel and leaves, and then her furburger gets up out of the water too. It grabs a smaller towel and sets off in the other direction, muttering something about being a “strong independent vulva who don’t need no body.”

A couple of days later, I hear a story in town. The lady I’d seen in the garden apparently went straight off to meet a suitor, but he rejected her when he found she didn’t have her faff any more. I dunno, some people are all about sex. Not me, I prefer to see the lady behind the…anyway, the villagers got word of this and chased her around town, shouting “there goes the clunge-less woman!”[1]

Meanwhile, the hooha itself was walking along, and tried to introduce itself to another man. He was alarmed, didn’t know what the hell it was. Thinking it was a toad, he drop-kicked it into the neighbouring field and ran away. (Fair play – nowt worse than talking toads, they always want something from you and it’s never cheap.)

And again, I happen to be on my daily walk the next day when I see the lady and the twat talking in the garden. It seems they’ve forgiven each other and want to be back together, but they’re not sure how to go about it. And then the unthinkable – they spot me passing!

“Any ideas?” The lady asks, having explained the situation. “We’re pretty desperate.”

I mean, I was happy to be helpful, so I did what just naturally occurred to me. So I wasn’t perving at all, officer, I was just helping the lovely lady sort her flaps out. Honest.[2]

That’s one way to avoid the congestion charge.

Once upon a time, Gold and Wang met on a road.

“Hello Gold. You can buy many things, but you cannot give someone happiness. That is why women love me best.” Said Wang, who was a proud chap.

Gold replied, “Hello Wang. You are wrong. I can give a woman the means to have long-lasting joy, but I have it on good authority that you cannot. You are unreliable, and that is why they love me best.”

And they bickered most of the afternoon. After a while, Gold saw a woman walking down the road towards them: “Let’s ask her and settle this once and for all!”

“Excuse me, kind maid,” said Wang, “But which of us do you love best?”

The woman thought for a moment. Then she picked up Gold, put him in her basket, and ran home.

“Pah!” Shouted Wang. “Well, if you like Gold so much, then you can’t have me at all!” And he ran away to hide in the woods.

Three weeks later, though Gold was happy at the woman’s house, the woman felt unwell. She felt unsettled. A deep yearning inside her belly changed to sudden hot flushes and then, an itch that was impossible to scratch all over her body. All her friends felt the same too. Gold could not help them. They realised they all missed Wang so terribly!

The women threw Gold onto a dunghill and set out in search of Wang. They rode their horses high and low across the country. On they went, across streams and hills, through tunnels and woods, until finally, one sunny day, they found Wang resting by a fountain, enjoying the warmth.

The women were overjoyed to see Wang. “Please forgive us for what we said!” They cried. Of course Wang forgave them, he missed them terribly, and itchily, too. “Please forgive me for making you choose between me and Gold,” he said “for I realise that was a silly thing to do for we have just missed each others’ company.”

Wang and the women enjoyed each others’ company for a few hours. They were all very, very happy to be reunited. But then some of the women began to talk.

“We cannot trust him,” one said.

“We must not let him run away from us again,” said another.

They all nodded and agreed.

Then the youngest spoke up. “I know – we should blind him! That way he cannot see to leave us.”

“But what should we do with the eyes?” The women cried. “We cannot let him find them and escape!”

The youngest spoke up again. “I shall keep them safe and hidden. I am the youngest, and most pure of heart here, so you can trust me with this treasure.”

So it was agreed. The youngest picked up Wang’s nads and bound them tightly to her chest under her dress. And then something strange happened. By the time the women and Wang had returned home, the eyes had vanished, and in their place, under the youngest’s dress, was a pair of soft, shapely orbs.

“And that is why women still have bosomed bodies, and whenever a man touches their breasts with his bare hand, right away the wang gets up, he raises himself and smiles, he begins stretching his limbs and believes that his lost eyes will be returned to him.”

So there you have it.

[1] Well, they actually call her something else beginning with ‘c’.

[2] The text actually says he “nailed” the vulva back in place. Urghhh. URGHHHH and OWWWWW.